My heart is heavy, friends.Â  Last Thursday, ABC announced it is canceling All My Children and One Life to Live, leaving my beloved General Hospital the only remaining ABC soap opera.

Of course it’s mostly about money.Â  These lifestyle shows that are replacing AMC and OLTL are much cheaper to produce than the soaps, and since people aren’t exactly flocking in droves to watch network TV during the day, networks want something cheap to put in those time slots.Â  It is a business, and I understand that.

I’m still disappointed, though.Â  GH is my show, but the others have a special place in my heart.Â  AMC has Erica Kane and she is pretty much the queen of daytime.Â  I’m kind of a student of daytime so you know I have spent some quality time with Erica Kane.Â  OLTL was my grandmother’s soap.Â  She loved Viki and especially Viki’s (first?) husband Joe Riley.Â  Indeed, much of the soap opera watching culture is familial.Â  People watch because their parents watched.Â  I suppose I ought to be honest and say women watch because their mothers watched.Â  Less and less women are watching soaps because more and more are working during the day or watching whatever is on cable.

The soap opera genre is…well…dying.Â  There isn’t any other way to spin it.Â  When I first started watching the soaps, some fifteen or so years ago, there were eleven network soap operas.Â  After January, there will be four.Â  Most significant in the mass canceling of soap operas that began in 1999 was that when NBC canceled Sunset Beach (which was only on the air from 1997 to 1999), it put another soap opera in its place.Â  Passions lasted until 2007.Â  Since Passions, there haven’t been any new soaps.

Last summer I wrote what I consider one of my stand-out blog posts about GH, Brenda, James Franco, and the future of the soaps.Â  In this post, I described my relationship with GH using an elaborate Thanksgiving metaphor:

You see, GH is like turkey at Thanksgiving. Turkey is one of my favorite things to put on a sandwich (the way that TV is one of my favorite things to put into my brain), but Thanksgiving-type turkey is kind of boring. It even looks boring. What color is that? Grey? Brown? Itâ€™s really a brown-grey, which is not a recognized blend of colors the way that blue-grey is. Furthermore, turkey at Thanksgiving is always the same. Its moistness and dressing may vary from year to year, but when we refer to â€œThanksgiving turkey,â€ we can be sure weâ€™re all talking about the same thing. You can count on turkey that way.

Thatâ€™s how I feel about GH. Is it the most interesting thing on Earth? No. Do I look forward to it? Not really. Do I expect it to be there at the same time, behaving in the same way every day? Yes, I do. Just like I expect turkey to be the same each and every Thanksgiving, I expect GH to be stupid and boring in exactly the same ways each and every day. Do I watch it every day? Hell no. But itâ€™s nice to know that itâ€™s there even if Iâ€™m not watching it.

That was, of course, before Brenda came back and before 2011 came on the scene and reduced me to a blubbering idiot who can barely do anything but watch General Hospital.Â  Lately I do watch the show pretty much every day.Â  That the show is available both on ABC’s website and on Hulu makes it easy for me to keep up.Â  These days, those moments I spend on the couch with GH and a Coke are sometimes the only thing standing between me and a mental breakdown.Â  I wish I were kidding.

Even though it is pretty obvious that GH‘s best days are behind it, there are some current elements that I like.Â  For example, I like what they’re doing with Michael.Â  His maturation is playing out much like one would expect after he spent his youth idolizing Sonny, and it isn’t easy for anyone who has been complicit in his upbringing.Â  I like this kid who is playing Michael, too.Â  He has not just a bit of a physical resemblance to Jason but also his way of not saying much and doing a lot of listening.Â  I still like that Brenda is back, too, though I am less than enchanted with how one-note she has been since her return.Â  Brenda used to be multidimensional.Â  I mean, the show is on every day; there is time for her to think about something other than Sonny.Â  The things I like about the show nowadays are the things that have always been there: the mob stuff; Brenda; Alexis and Jax’s enduring friendship (though neither of them are getting much screen time these days); Kelly’s as a spot for dates, dramatic confrontations, and clandestine meetings (seriously, sometimes a character will show up there three or four times in one day); and all the typical soap opera tropes like cheating, familial betrayal and familial reunion, and Thanksgiving at the Quartermaines.

You see, I love GH because it’s there every day and it isn’t complicated.Â  It is what it is.Â  I only get irritated with it when it tries to be something else.Â  We’ve been over all that already, though, and today I just feel sad about it, the kind of sadness that is too precious to defend.Â  So now I will indulge in the thing about GH that I love the most: sloppy nostalgia.

When I first started watching GH, Ned and Alexis were my favorite couple.Â  Most of the time, the acting on a soap opera can be…uneven…so the success of a romantic pairing depends on chemistry which is far more difficult to obtain, measure, and predict.Â  You can teach acting (so why don’t they?) but you have to mine for chemistry.Â  Wally Kurth and Nancy Lee Grahn had this illusive thing called chemistry, but their individual characters weren’t the typical hero and vixen types that populate these soap opera villages.Â  Ned had this tension between duty and passion that felt almost Victorian, and Alexis was the kind of professionally successful, emotionally disastrous neurotic that I find in primetime dramas. 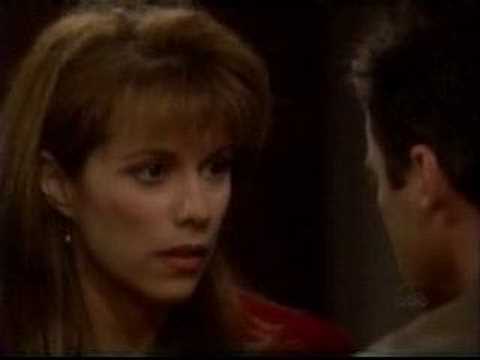 At 16, I was likely not part of the target demographic for the Ned and Alexis pairing, but I was hooked from the first moment I saw them together.Â  (I was a weird kid, but you knew that already.)Â  Ned and Alexis never had a Brenda and Sonny presence on GH.Â  They were always a B-level couple.Â  It’s helpful to think of them as the Arrested Development of soap opera couples: better than the others in their genre, with limited content and lingering bitterness.Â  I suppose that Ned and Alexis didn’t become a supercouple because they were just an entirely different kind of animal.Â  For example, more than two years passed between their first date and that “I love you” scene above.Â  Can you imagine a couple dating for two years on a soap opera these days or any days?Â  That’s two standard years with no interruptions in the relationship: no cheating, no faked deaths, no funny business at all.Â  Those two years are both a reflection on the characters’ respective neuroses and on the amount of attention the show gave to the couple.

You see, because they were never going to be a supercouple and because Ned and Alexis weren’t the kind of front burner characters who hog screen time, Ned and Alexis took things slow.Â  It gave the relationship a weird realness that soap couples never get.Â  Nothing on a soap opera feels real.Â  The pacing is strange, the writing is awkward, and one day can last for five or six real days.Â  I haven’t even covered the wacky stuff that happens to these 20 people who manage to make their village function like a metropolis despite its tiny, inbred population!Â  Plus, Ned and Alexis acted like grownups nearly all of the time.Â  So they just didn’t fit in.Â  In retrospect, I should feel fortunate that they were allowed to become a full-fledged couple at all.

These old scenes take me back.Â  They remind me of what it was about GH that attracted me in the first place.Â  I liked that the story just went on and on, though I can’t quite explain why the total lack of closure was a positive for me.Â  I read a story in the newspaper over the weekend about grief and how the concept of closure is a uniquely American thing. Other cultures don’t buy into it.Â  So maybe my affection for the soaps’ storytelling style is a sign of how worldly and cosmopolitan I am.

Another thing I liked about GH right away is how funny Ned and Alexis were.Â  I’m talking real humor here, not funny-for-a-soap opera.Â  I guess humor is subjective, though, so who knows if they were really funny or not?Â  No other fake couple has grabbed my attention the way that Ned and Alexis did. (We called them Nexis back then, but I can’t quite re-inhabit that person who called them Nexis.Â  Thanks be to science for that, at least.)Â  Three generous paragraphs ago, I used past tense to describe them as my favorite GH couple.Â  The truth is that they are still my favorite couple.Â  There ought to be a pot of gold at the end of the rainbow of this post, but instead, I’ll give you this, one of my favorite Ned and Alexis scenes.Â  It’s at about the 5:50 mark, when Ned gets off the stage and Alexis says “I felt like a groupie!”Â  I like the moment because it’s so Alexisâ€”I mean, people who are groupies don’t call themselves groupiesâ€”and yet so out of characterâ€”she’s sitting on his lap, for crying out loud!

However long I have left with GH, it has been a great ride (a thousand points if you get that reference), but the truth is that most of the things I’ll miss about the show whenever it takes its leave are already gone.