I’ve been watching thirtysomething lately, and while I’m not ready to talk about that show just yet, it has reminded me of another 1980s-type show that I just adore.Â  It is called L.A. Law.Â  Please tell me you’ve heard of it.

My love affair with L.A. Law began in 2002 when NBC aired a reunion movie.Â  This is how we know it is love.Â  Let me be clear: this is not a good movie.Â  Do not watch it.Â  I have since watched it again and wondered what in the world I saw in there that made me want to watch the series.

Shortly after my inexplicable infatuation with the show began, I discovered it in reruns on A&E.Â  I taped them.Â  Yes, I programmed my VCR to record L.A. Law in 2002â€”all while narrating in an old-timey voice.Â  A&E stopped showing the reruns before I had made it all the way through all eight seasons, but not before I had fallen completely in love.Â  A couple years ago, I again found some reruns on cable and enjoyed a passionate reunion with the show.Â  Now I don’t have cable and the show isn’t available on DVD so I am left yearning because L.A. Law is permanently in my top five favorite TV shows.

Let’s start at the beginning.Â  Some of the people who have been invited to watch this TV gem with me have suggested that the opening sequence is not only cornyâ€”with the dramatic sax over the blank screenâ€”but a tad too long.Â  These people are obviously on crack. 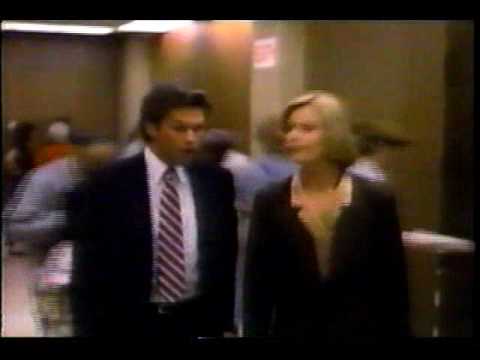 I like a little humor in my drama and L.A. Law delivers that.Â  It was David E. Kelley’s first writing job, and you can really see his style emerging when, for example, a lawyer sings his opening statement.Â  Since he is just a writer and not a showrunner, the Kelley effect is somewhat muted as compared to Ally McBeal or Boston Legal, and honestly, I prefer it that way.Â  That means that every once in a while there will be a case where midgets allow themselves to be used as bowling balls, but there will be generally be a feeling of such seriousness and responsibility that the midget bowling episode will be obviously an anomaly rather than the norm.

If you’ve ever even glanced at the show, you’ll guess that Grace Van Owen is my favorite character.Â  She’s like all the rest: professionally amazing and personally screwy.Â  Susan Dey was 80s sexy in a way that I didn’t know was possible.Â  When I started watching L.A. Law, the only real exposure to 80s TV I had had beyond Mister Rogers and Sesame Street was Facts of Life and Family Ties.Â  Not only does she not have the big hair that largely characterized her decade, but Grace is also pretty funny in a self-conscious, awkward, over-analyzed kind of way.

Even though Grace is unequivocally my favorite, I want to propose that Ann Kelsey (played by the terminally unappreciated Jill Eikenberry) is the best character.Â  Her reaction to each intellectual, emotional, and ethical quandary that comes up is the same as mine.Â  Even if I start out not agreeing with Ann’s point of view, she ends up convincing me she’s right by the end of the episodeâ€”every time.Â  That her late-80s/early-90s views are in line with my 2011 feminism makes her part prophet and part indicator of how far we haven’t come.Â  The battles for reproductive choices, wage equality, and LGBT rights that Ann wages remain relevant.Â  Grace fights these battles, too, but she is a prosecutor, which means she doesn’t get to choose her cases and she is largely bound to the law as it is.

The Internet Movie Database claims that Jill Eikenberry appeared in all 171 episodes of L.A. Law, and that sounds about right.Â  Ann is always there, balancing work and family and holding firm to her convictions.Â  Grace never gets the marriage and family thing right and restlessly moves around between being a prosecutor, a judge, and a partner at McKenzie Brackman, the show’s central law firm, before eventually leaving L.A.Â  It is somewhat troublesome to me that Grace is more compelling to me when I can clearly articulate why Ann is the superior character.Â  The problem is that Grace makes for a better TV character because drama both flows to her and from her while Ann makes for a better person because she is well-rounded.

I wish I could watch L.A. Law on DVD and just immerse myself in it.Â  There are the aforementioned 171 episodes, though, so I’m probably lucky that it isn’t on DVD.Â  I have seen perhaps sixty percent of the show, but I didn’t need more than two episodes to know that I loved it.Â  It remains for me the gold standard of law shows, workplace dramas, and TV shows in general, and I haven’t even mentioned the same-sex kissâ€”the first between two women on a network TV show.Â  That’s the kind of controversial, cutting-edge, envelope-pushing, point-making storytelling that makes L.A. Law special.