On Friday night, I started watching Out of Practiceâ€”a sitcom that lasted just the 2005-06 TV seasonâ€”on Netflix.Â  I was infatuated instantly, and Sunday night, I finished the entire 22 episode series.

On the surface, there is nothing out of the ordinary about this show.Â  Maybe that’s why it didn’t last long.Â  I’ve given up trying to figure out why people will watch one show but not another.Â  It’s above my pay grade.Â  I vaguely remember when Out of Practice was on, but I didn’t watch it so maybe it just had bad promos.Â  We all know I’m an easy target.Â  Just because there isn’t anything that stands out in a mainstream way that doesn’t mean there isn’t anything about Out of Practice that didn’t stand out to be when I ran across it in the TV section on Netflix.Â  For one thing, it stars Stockard Channing and Henry Winkler as doctors who have just gotten divorced.Â  High achievers are some of my favorite TV characters, and I have always liked Stockard Channing.

Their three adult children are also in the medical profession.Â  Ty Burrell (aka Phil on Modern Family) plays Oliver, who is a plastic surgeon, and some guy named Christopher Gorham who I don’t think I know plays Ben, a marriage counselor.Â  The character I’m most interested in is Paula Marshall’s Regina, who is an ER doctor andâ€”wait for itâ€”a lesbian.

And here we get to the under-the-radar remarkableness of this show.Â  Regina is not a TV lesbian; she is more like the sort of lesbian you could actually know.Â  When the show begins, she is already out and no one cares.Â  Her being gay isn’t the entire point of her character.Â  The writing and Marshall’s acting manage to find the balance between ignoring it and putting it obnoxiously front-and-center.Â  There is none of that homophobia packaged as jokes that we find so often on sitcoms, even the ones with gay characters.Â  (There is, however, some of the typical biphobia that pop culture can’t seem to let go of so it can follow in the footsteps of racist and anti-Semitic “humor.”)

The show follows some standard sitcom paths of mistaken identity, over-the-top secret keeping, and other awkward situations.Â  There was even a classic Mary Tyler Moore Show-style bathtub incident.Â  The cast has such great chemistry that most of these tropes remain funny even as they are being reused and recycled.Â  Take, for example, the everything-goes-wrong-on-Thanksgiving episode.Â  (Magic happens at about the 5:10 mark.) 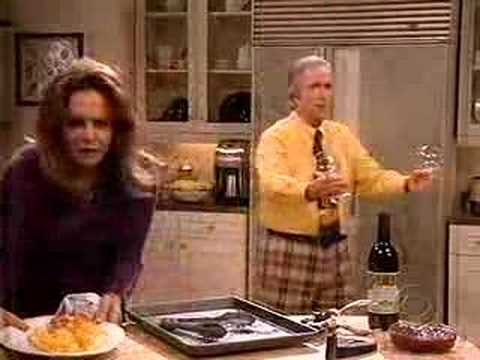 I don’t know when Henry Winkler transitioned from The Fonz to some old guy who prances, but I applaud it.