Over the past two weekends, we rewatched both seasons of the short-lived Sports Night.Â  I watched this showâ€”Aaron Sorkinâ€™s firstâ€”when it originally aired from 1998 to 2000.Â  I was in high school, and Sports Night served as my introduction to the idea that TV shows neednâ€™t be either comedies or drama.Â  They could be both.Â  In the more common one-hour version, this genre is called a â€œdramedy.â€Â  Andy suggests calling the half-hour version a â€œdramcom.â€Â  Iâ€™m not so sure we canâ€™t just use â€œdramedyâ€ for both lengths.

In addition to this new genre, Sports Night also helped to pioneer the sitcom without a laugh track concept.Â  Well, sort of.Â  The legend goes that Aaron Sorkin initially presented the show sans laugh track and the network insisted one be added.Â  What we got was more unobtrusive than a standard laugh track, though.Â  Itâ€™s quiet, almost like background noise.Â  At times, it seems as if the other people in the office are producing the laughter rather than its being canned.Â  Witness: 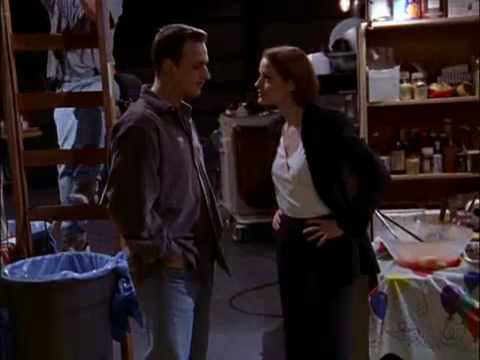 That scene also illustrates what one would assume to be the major obstacle to my enjoyment of Sports Night: sports.Â  I like politics so it is not surprising that I like West Wing.Â  I don’t like sports, except basketball and that is really a watching it thing rather than a talking about it thing.Â  Sports Night is talking about sports.Â  The original tagline for the show was: “It’s about sports. The same way Charlie’s Angels was about law enforcement.”Â  If you like sports and Aaron Sorkin, it is entirely possible that you might enjoy Sports Night even more than I do, but I enjoy it just fine without liking sports.Â  I never feel like Rebecca, who wants to sit in the middle of the room and cry, because I don’t understand what the characters are talking about.Â  I like it when people are passionate about their jobs, and the characters on Sports Night are nothing if not passionate about sports journalism.Â  That makes it fun for me.

The talent and likability of the cast is another thing that makes Sports Night fun.Â  It is hard to believe there was a time when I had never heard of Felicity Huffman, had never seen Peter Krauseâ€™s face, and had never wished Sabrina Lloyd was in more stuff.Â  The cast was mostly unknowns in 1998, and Robert Guillaume was supposed to be its star power.Â  I guess they were counting on a lot of Benson fans.Â  Maybe the lack of “names” is what sunk the show.Â  At 17 and not interested in sports, I was hardly the target audience for the show, and I really can’t remember why I watched it in the first place.Â  It didn’t take long for my best friend and me to become infatuated with the personal dramas of the characters.Â  Watching it all these years later, it is the professional drama that compels me now.Â  If I had been 30 in 1998 (perish the thought!), the mixture of the two would’ve ensnared me for sure.

In addition to the main cast, Sports Night also featured some past and future TV crushes of mine.Â  Teri Polo (who can be seen in the above clip and who once starred on a sitcom called Iâ€™m With Her that only I watched), Megan Ward (the first and best Kate Howard on General Hospital), and Paula Marshall (who played the lesbian daughter on Out of Practice) all show up as girlfriends of varying seriousness.Â  Indeed, the women floating in and out of the Sports Night offices are numerous.Â  Perhaps they don’t stick around because of the sports, perhaps it’s because the show only lasted two seasons and there just wasn’t anywhere to stick around, or perhapsâ€”just perhapsâ€”it is because they were all intimidated by the wonder that is Dana.

Felicity Huffman plays the show’s executive producer, and despite a passing mention of her mother’s disappointment in her career path, her gender is not up for discussion.Â  Her employees, most of them men, respect her as their boss even when they disagree with her decisions.Â  It isn’t the sort of respect that is really just good manners, either.Â  You know what I mean.Â  I’m talking about men who love their mothers and whose fathers taught them to be courteous, never shout at women, and always hold the door.Â  No, Dana’s employees are not afraid to shout at her, nor is she afraid to shout back.Â  (Indeed, there is a fair amount of shouting on Sports Night.)

Other than the decidedly non-issue that is her gender, Dana is a pretty typical example of how highly successful women are portrayed on TV.Â  She is very good at her job, and since 90 percent of all the scenes on Sports Night take place either in the studio, in an office, or in the conference room, we as viewers get to see her being good at her job.Â  When she asserts that she is good at her job, we believe it.Â  When others assert that she is good at her job, we are glad they noticed.Â  Aside from work, though, Dana doesn’t have much but a history of emotional avoidance.Â  She stalls what appears to be a real connection between her and Casey with what is surely the show’s dumbest plot point, and then never picks it up again.Â  She leaves and gets left by men who were never worthy of her anyway.Â  She fancies herself a cynical New Yorker who doesn’t have the patience for musical theatre, and then her life is transformed by The Lion King on Broadway.Â  This is my favorite Dana scene because her excitement is so genuine, and because these people are rarely so moved by something not involving sports.

In retrospect, Dana is indeed a type, but when I was 17, I was not so jaded.Â  Dana was amazing to me.Â  I romanticized the mess that was her work/life balance.Â  All I wanted when I was 17 was to be a “career woman,” whatever that meant.Â  Dana and Alexis from General Hospital, both total wrecks emotionally, represented that for me.Â  In the last episode, the fictional cable network these characters work for gets sold and it looks like their show will get canceled.Â  When it turns out that the new owner will continue the show, there is really no happier ending for Dana.

Another of the show’s allures for me is that it was about television and I was just beginning my love affair with the medium.Â  Sports Night is not Sorkinâ€™s only show about television, but it might be the best (though I do have high hopes for his new project, an HBO show about cable news).Â  After West Wing, he tried it again with Studio 60 on the Sunset Strip, a show I loved not blindly.Â  I could see its flaws.Â  It took itself too seriously.Â  Sports Night does not do that.Â  The work that the characters are doing on Sports Night is not life-and-death; itâ€™s sports.Â  The show itself acknowledges that these people take their work too seriously and, in doing so, ceases to take itself too seriously.Â  This is the line Studio 60 doesnâ€™t draw.Â  West Wing gets away with taking itself too seriously because the work those characters are doing is indeed life-and-death.

It is inevitable that I compare all of Sorkin’s show to each other.Â  They are so similar in aesthetics and contain so many of the same faces.Â  My favorite thread connecting Sorkin’s shows together is that they’re all about writers.Â  Casey and Dan on Sports Night self-identify as writers; Toby, Sam, and Will on West Wing are first and foremost writers.Â Â Studio 60 is not just about producing and acting a sketch comedy show; it’s about writing one.Â  Maybe it is because Sorkin himself is a writer, but the writer element always feel the most prominent to me.Â  It draws me to Sorkin and keeps me there, even though I’m sure the man himself is an arrogant sexist I wouldn’t like much if I knew him.