Indiana, we’re all for you!

Here we are in the thick of college basketball season. This is my favorite time of the year. All over the Twitter and Facebook, people are complaining about the cold, lack of sunshine, and blah blah blah. Every time I see a post like that, I think, “Don’t you know how lucky you are to live in Indiana during this time of the year?”

I don’t know when I started liking basketball, but it is possible I was born this way. There is an entry in my fourth grade diary that goes something like this: “Tonight we watched the game. Â Duke won. Â It was bad.” I can only assume Duke was playing IU, and using the diary as evidence, we can also safely say that I have spent at least twenty years not wanting Duke to win.

I often find myself trying to explain why I love basketball because my partner doesn’t love it. In fact, he doesn’t even like it. He doesn’t judge me for my passion, but because I so respect his views and feelings, the fact that basketball doesn’t light his fire drives me to want to have a great explanation for why it lights mine. But I fear there is no great explanation. It’s nice to throw all my energy into something that doesn’t matter for two hours, but let’s face it, much of my energy is spent in similar ways. Most of the things I spend my time on do not matter. With basketball, it comes down to this simple thing: I like to watch the ball go through the hoop.

This year is particularly special because the Indiana Hoosiers (my team of choice) are operating with a winning record. This isn’t usually noteworthy because this is Indiana basketball after all, but we’ve had a couple of what we like to call “rebuilding” years because “bad” just sounds so negative.

I am not a fair-weather fan, but I do understand the impulse. It is more fun to watch them when they’re winning. What I don’t understand is finding pleasure in anyone’s defeat, especially IU’s. I try not to root against teams. I’d prefer it if Duke and Kentucky would just get the eff out of my face, but mostly I just like to root for IU. Last week, when IU was stumbling a little during a three-game losing skid, many of my so-called friends on Facebook and Twitter felt compelled to assert their smug correctness in “predicting” IU’s downfall. What is the point of this negativity? Why do you watch IU basketball if you expect them to lose? I always expect them to win, which probably means I am too simple to be a real sports fan and that’s OK with me.

I stuck with the Hoosiers through the rebuilding, and this season feels like my reward. For one thing, there is nothing to be embarrassed about, nothing I have to set aside in order to enjoy the game. There aren’t any recruiting violations hanging over the team, no academic or attitude issues, nothing like that at all. There is not one member of this year’s team I wouldn’t have over to my house for dinner. I don’t think I’ve ever been able to say that.

This is the first basketball season I haven’t had cable. First world problems, I know. I thought being without the Big Ten Network and ESPN would help me gain some perspective. I thought maybe I would realize that IU basketball-watching is a fun hobby but it needn’t dictate how I spend every hour from December to April. It turns out that basketball is a necessary part of winter and I just need to deal with it. Since I don’t have cable, I have been running all over Fort Wayne trying to watch games. It is getting tiresome. For example, tonight IU plays Wisconsin at 9:00 p.m. That means that the game won’t be over until 11:00 at least. There isn’t anywhere other than my couch that I want to be at 11:00 p.m. on a Thursday night in winter. So I probably won’t be watching the game tonight. Instead, I will likely fight with the various radios in my home that all refuse to receive AM stations and then finally resort to a play-by-play on ESPN.com. It’s pretty sad. It looks like this:

Well, hopefully tonight it won’t look exactly like that.

Part of my inability to stay away from IU basketball is due to the aforementioned likability of this year’s team. Right now, my favorite is Verdell Jones III. This kid is super cute, and because he is a senior, he represents for me the beginning of the movement to put the magic back in Indiana basketball. He isn’t perfect. Does he commit too many turnovers? Yes. Dude has a tendency to double-dribble when he gets excited, but I find it difficult to blame him because a) I get too excited too and 2) he was there when no one else was. If he were just now entering the program, he wouldn’t be a starter and he might not even be a scholarship player. There is just too much talent there now.

Next year, Verdell will be gone, though, and I’ll have to find a new favorite. I think it will be Will Sheehey. He is from Florida (whereas Verdell is from Champaign-Urbana, Illinois which means something here in Big Ten country) and usually I like the guys from Indiana like Tom Coverdale. Will is a lot like Tom Coverdale, though. He has an orneriness to his style that was definitely evident when he got two technical fouls on Sunday and had to be ejected from the Penn State game. The scuffle was all talk and might not have even resulted in technical fouls if the Cincinnati/Xavier on-court fist fight earlier this season hadn’t prompted tighter officiating all over the NCAA. Anyway, I’m not mad at Will. A Penn State player said some stuff and then Will said some stuff. He was very composed and didn’t object when he had to leave the game. The whole incident reminded so much of my beloved Tom Coverdale that Will Sheehey is now forever cemented in my heart right next to Coverdale and Dane Fife and all the other guys who are just a little too ornery for their own good.

Aside from Verdell and Will, who are major contributors to the team’s success this season, we have two former Indiana Mr. Basketballs on the team. Two! Jordan Hulls has been around awhile, but Cody Zeller is a freshman. Cody has been a much-celebrated addition to the team, and so far he has lived up to the hype. He has talent to spare, but what I like about him is how he has somehow made the whole team better. It is as if all they needed was some pressure removed and suddenly everybody is a damn star. It has been so much fun to watch.

And just watch that ball go through that hoop here. Â (And ignore that Coach Crean sort of looks like he’s going to be sick.) 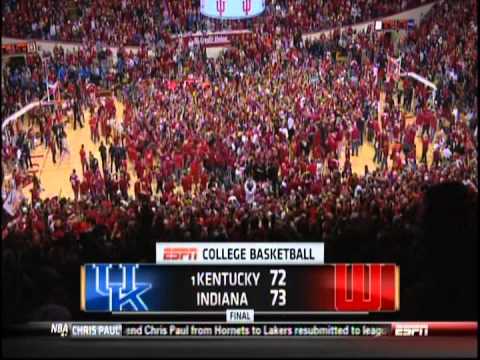