Robin is dead and I don’t feel so good myself

Sometimes, I get really lonely in my fandom. I just want one person with whom I can dissect, love, laugh, and most of all complain about General Hospital.

Because this shit with Robin? It needs to be complained about.

So I’ll cozy up to the internet and spill my feelings all over this MacBook.

I had made my peace with Robin’s exit. I knew that Kimberly McCullough wanted to leave the show, and the last thing I want to do is hold her back. It’s just that the timing is not so good. One Life to Live has been dead barely a month, and internet is just silly with rumors that GH isn’t far behind. Even though I know intellectually that Kimberly McCullough doesn’t owe me anything, my heart is crying out, “Why Robin? Take anyone but Robin!” This particular loss feels emblematic of the larger soap scene because Robin has been part of GH for so long. Kimberly joined the cast when she was seven years old.

Longevity used to be something the soaps could offer actors that other acting opportunities couldn’t. That stability just isn’t part of the job anymore. When I first heard that Kimberly was leaving the show, I assumed she was bailing before the ship went down. Maybe she is, but I’m not bitter about it anymore. She has given it 25 years of her life. Robin was never my favorite character, but she was always important. Her history blends with the show’s history, and she represents GH in my mind as much as anyone does.

This is a loss that will ripple throughout the canvas. The potential for story and character alike is not lost on me. Nobody appreciates a little sloppy nostalgia more than I do. I hope the show plays Robin’s death for all it is worth, and it seems like they plan to do just that. Anna is already back and Robert is close behind her.

So it is not Robin’s death that I object to. It’s the way it went down.

After Kimberly decided to leave the show, there was a changing of the guard at GH, and Robin’s death scenario may have been Jill Farren Phelps’s middle finger on her way out the door. A piece in the Daily Beast earlier this week suggests that at the very least, Robin’s death didn’t play out as Kimberly hoped it would. In fact, it was not even supposed to happen until April or early May. The notion that this important piece of GH history just fell through the cracks is unacceptable to me. Robin deserves better than to be a casualty of behind-the-camera temper tantrums. After all that Robin has meant to GH, for her to go out this way dishonors not just the character but the actress and the fans. 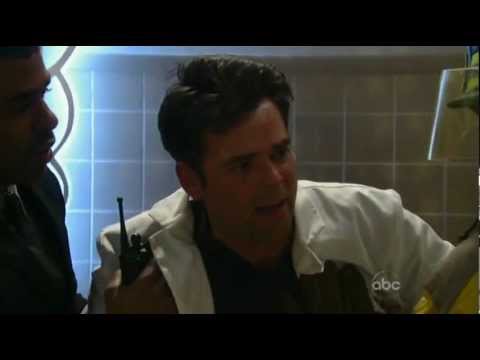 It’s just so dumb. I mean, I’m pretty much used to stupid things happening on soap operas. That’s kind of the way they work. But there’s stupid and there’s STUPID. Tracy marrying Anthony Zacchara was stupid. Robin dying in a random explosion in the lab was STUPID. Of course, I will eventually get over it. I always doâ€”especially now, when we’re in the trenches of a daytime television war. If GH makes it through this year and I can still watch this show in 2013, I’ll do it. I’ll still miss Robin and wish this had gone differently, but I’ll take it. I’m not ready to give up on my show or its genre.

Looking for photos for this post really drudged up some sloppy nostalgia for me and I’m sure next week on GH, as more and more people find out about Robin’s death,Â will just heighten that feeling. Luckily, I’ll have this gem to look at whenever I feel blue. And now you’ll have it, too. Long live the ’90s!

And then there were four Happy birthday, Madeline